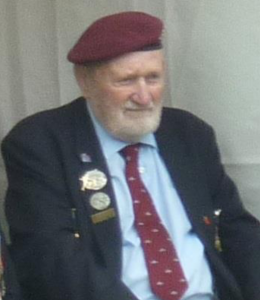 Dennis enlisted in the Army in 1942, and after initial training, joined the Middlesex Regiment. In 1943 he was recruited by Lt. Col. Martin Lindsay for the 9th Parachute Battalion, part of the British 6th Airborne Division.

In the early hours of D-Day, June 6th 1944, Dennis’s aeroplane was diverted eastwards, across the flooded area of the River Dives instead of Drop Zone ‘V’ at Varaville, for the assault on the Merville Battery. After the jump, it proved to be impossible to return directly to Drop Zone ‘V’, and when he found his container, its contents were badly damaged and he was deprived of vital equipment.

Dennis was wounded by a grenade, the wound gradually becoming more serious due to a lack of dressing and was unable to rejoin the battalion, eventually being captured by a German patrol. After treatment to his wounds and a long trip, Dennis eventually arrived at Stalag IX-C at Mülhausen in Germany, and subsequently spent some time in a salt mine at Menzengraben near Merkers, where the Nazis hid part of their war treasure.

Dennis has been returning to Normandy nearly every year since 1989.