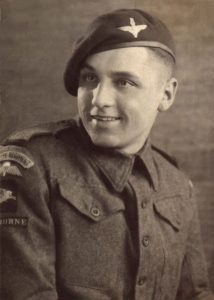 Christopher Jack Walton was born in Kentish Town, London on 25th December 1924. He was the youngest of the three Walton Boys that were called to serve their country.

The eldest Nathan, was a member of the TA and joined the Royal Artillery at the outbreak of war in 1939. He survived the wounds that he received at Dunkirk, only to die on active service in 1942.

Next was Robert, also a member of the TA, joining the Royal Artillery in 1939. He served with the 64th Medium (London) Regiment in North Africa, where he received life-changing injuries as a result of a German air assault whilst towing the gun in his charge.

Desperate to follow in the footsteps of his brothers, Christopher first joined The 5th Battalion Home Guard at the age of 17 and served from May 1941 until May 1943. He was subsequently called for war service with the Royal Fusiliers (14614464) on May 20 1943.

He undertook his basic training at Brentwood in Essex and on completion, sought selection for the Parachute Regiment. He attended the selection process at Bury St Edmunds and was invited to join the regiment.

He attended Course number 87 at Ringway in Manchester from 13th – 25th October 1943. After a satisfactory completion, he was posted to the 9th Battalion The Parachute Regiment in late October 1943.

He was initially posted to ‘A’ Company but was subsequently transferred to the machine gun section, where he was the number two, to Corporal Harry Lockett on a Vickers Machine Gun.

Christopher was part of the assault on the Battery at Merville on the 6th June 1944. There is anecdotal evidence that he was also a member of the patrol that discovered German activity at the Château Saint Come on June 8th 1944. I recall the stories of him and his comrades, brewing tea and using the captured German payroll as fuel for the fire. In July 1944, he received a mortar wound to his leg and was briefly repatriated home for treatment. He returned to his unit within a two-week period. He participated in the action at the River Seine in August and was also involved in operations at Bréville, Dozule, Pont L’Eveque and Beuzeville. He returned to the UK with the Battalion in September 1944.

He was granted permission to marry on December 3rd 1944 but within a few days, was called back to the Battalion to prepare for action in the Ardennes during the winter of 1944-5. On Christmas Day 1944, he was billeted in the Refectory of St Peter’s Abbey in Ghent, Belgium. The winter was quite severe and the men were using a coke stove for heating. A faulty flue resulted in a near death experience for many of the men, when they were overcome by carbon monoxide poisoning. Prompt action prevented serious injuries and there were no long term effects.

He was involved in the recovery of bodies at the Bande massacre and was involved in the internment of the victims. He recounted how the RAF dropped a consignment of Army greatcoats to the Battalion, to ensure that the burial proceedings were conducted with absolute dignity.

After action in the Ardennes, he moved to Horn in Holland where the machine gun section set up a position near to Roermond by the River Meuse They were relieved by the Americans and returned home to prepare for the Rhine Crossing.

On March 24rd 1945, Christopher took part in Operation Varsity alongside his comrades in the Battalion. His C47 aircraft was hit by enemy anti aircraft fire and suffered catastrophic damage. The aircraft was destroyed and he was released from the aircraft as it disintegrated. He fell from the sky in an unconscious state with his body tangled in the rigging lines of his parachute. He landed north of the Diersfordt Wood, hitting his head on the railway line. He was captured by German Fallschirmjäger, suffering a severe head wound. He received treatment for his wounds and was incarcerated at Stalag X1-B in Fallingbostel, Germany, where he remained until the end of the war.

He was repatriated in June of 1945. As far as he was aware, he and his comrade Kenny Gould were the only two survivors from the incident.

Christopher doesn’t appear on records from the National Archives as a prisoner of war, however it is confirmed in his service record.

The wounds suffered at Operation Varsity were such that his medical classification was downgraded from A1 to C2. He was confined to home duties for a period of two years following his liberation from capture and was deemed unfit for parachute duties. He was transferred to the Royal Army Service Corps until his demobilisation in 1947.