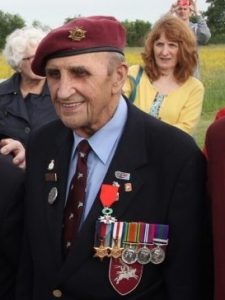 CYRIL TASKER, who has died at the age of 97, saw service as a member of 716 (Airborne) Light Composite Company, RASC, in all the major operations of the 6th Airborne Division in Europe from D-Day to the historic meeting with the Red Army (Russian) troops in Wismar on the Baltic coast that marked the end of the war in Europe.

The glider-borne company’s role was to supply front-line troops  with rations, ammunition, and other vital goods. Cyril flew to Normandy with them on D-Day, and his glider landed near Ranville in the midst of a battle.

“We quickly dug in around the landing zone,” Cyril recalled. “It was very frightening”.

His company, which included the 9th Parachute Battalion in its deliveries, set up a depot in a farmhouse on the banks of the River Orne. The enemy quickly identified it as a target, but during the battle for Normandy, Cyril and his company never failed to keep the units supplied.

Leslie Cyril Tasker was born on 25 April 1923 in East Hoathly, Sussex, the son of Steven and Kate Tasker. His father was a farmhand, and the family moved several times in his younger years necessitating several changes of schools.    He spent a year at his first school in East Hoathly, and then went to schools in Upper Dicker, Lewes and Whitehawk, near Brighton.

He left school at 14 and took a job as a petrol pump attendant at Tilley’s Garage in Brighton where he learned to drive. After passing his driving test, he joined a local firm, Allen West Haulage. s a van driver before being called up.

Like many youngsters too young to join the forces, he had served in the Civil Defence Volunteers (later Home Guard), and already had two years experience as a driver when he joined in the Royal Army Service Corps in April 1942.

After basic training on Salisbury Plain and at Carlisle, he was sent to Belfast to help move rations to various units. In August 1943, he returned to Salisbury Plain to join 716 Company, which was attached to the 6th Airborne Division. The unit spent many weeks training to load Jeeps and trailers from the gliders.

D-Day was his introduction to war. On June 3, Cyril’s company was transported in three-ton lorries, with side and rear ‘curtains’ closed, o a field near Portsmouth packed with gliders. Three days later, his glider touched down near Pegasus Bridge.Its contents, which included a Jeep, were quickly unloaded and driven off to the combat units.

Coming under fire again on his rounds, Cyril jumped off the Jeep to take cover near a bungalow. A British officer draggged him into a ditch just before a mortar bomb exploded close by. His saviour turned out to be Maj-Gen (later “Sir”) Richard Gale, the 6th Airborne Divisional commander, who asked Cyril if he had ever been under fire before. Cyril said he hadn’t.

The sequel to the incident came a decade later when Cyril was chosen to carry the ashes of poppies, that had been blessed at a Remembrance service at Westminister Abbey, for scattering by Field Marshall Montgomery at Ranville War Cemetery. General Gale was also there, and told Cyril he thought his face was familiar. Cyril explained that the general had saved his life, and recounted the incident. Both Gale and Montgomery went away laughing.

On another occasion, while on a night perimeter patrol, Cyril  bumped into a lone, but armed German soldier. It was clear that the soldier did not want to be there.  He told Cyril his life story, all the while Cyril was wondering how to extricate himself from the situation. Suddenly the German stopped chatting. He shook Cyril’s hand and walked away quite casually, and never looked back.

A countryman at heart, Cyril’s skill came in useful when he found some cows on a farm that had not been milked for days. He milked, and gave the fresh milk to his friends.

His company returned to England after several months in Normandy amid rumours they were to train for the invasion of Germany. However, before that happened, Cyril was in action again later in the year in the “Battle of the Bulge”, Hitler’s huge counter-offensive in the Ardennes aimed at splitting the Allies.The winter of 1944 was one of the coldest in modern history.

In March 1945, the 6th Division flew across the Rhine to Germany as part of Operation Varsity. After the lessons at Arnhem in September 1944, the decision was made to land the division directly on the target, which was in Germany and heavily defended by the enemy’s anti-aircraft batteries. Despite losses, Cyril survived and continued with the division to Wismar on the Baltic Coast, where he and his compatriots met the Red Army, and the war came to an end.

He was honoured by France with the Legion of Honour.

Cyril was demobbed as a sergeant in May 1947, and on 14 June 1947 he married Jeanne after a whirlwind romance at Woodingdean church, Sussex. Money was tight, so their first home was a tent in his mother’s front garden, and he went back to work for Allen West Haulage as a truck driver.

Their first child, a son, Les, was born on 3 August 1948, and, after moving to Hollingbury, near Brighton, they welcomed their daughter, Christine, into the world on 24 February 1951. They lived in Hollingbury for a number of years before moving to Lewes, the town they both loved. Sadly, they suffered the loss of both Christine in 1997, and Les in 2017 with great dignity, humility and steadfastness in the knowledge they both had each other.

Cyril then worked for East Sussex County Council Highways Department in administration until his retirement in 1987, aged 64. He continued with part time jobs at the Council depot where he maintained the grounds; he also worked as a petrol pump attendant at a garage in Glynde.

After the loss of Christine, the couple ran a bric-à-brac stall at the weekly Lewes Town Hall market, which lasted over 20 years. They gave it up, reluctantly, last year. They were regular guests at the town’s annual Mayor-making and at Remembrance services in Lewes.

The couple went into residential care at a home in Ringmer, near Lewes, in September 2019, where Cyril is survived by his beloved Jeanne.