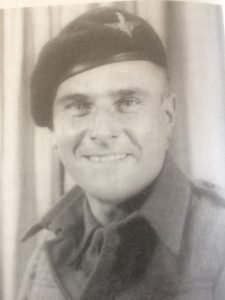 An Essex boy from Heybridge, Doug was Sergeant in A Company. He could boast that he invaded France twice on D-day. As stick commander, he was last to jump, but his entrenching tool became stuck in the plane’s superstructure with the pilot heading back to Blighty like a homing pigeon. Back home, some gliders were about to take off, so he had to endure his first ride in a sick-making Horsa and without his parachute. He was not impressed! He was heavily involved in the Chateau St Come action, including acting at butt-marker for an annoying German sniper at one stage. Twice wounded, he returned to his old job in East Anglian Electric after the war. He was one of the founder members of the Reunion Club and visited Normandy many times. During several visits he was promoted to the rank of honorary Major as he gave talks to young Parachute Regiment recruits. It was a roll and rank he relished. He was quite a lad!