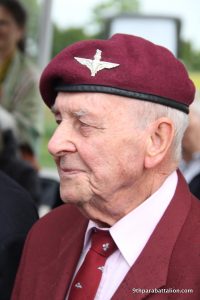 On June 8 the 9th Parachute Battalion moved into positions around the Château St. Côme. The château was a dominant feature on the high ground overlooking Ranville and the vital bridges over the Caen Canal and the River Orne. It was imperative that this ground remained in Allied hands and the Germans would fight hard to take it from them.

On June 10, after two days of heavy combat where the Paras were outnumbered by three to one, Geoff was part of a patrol that was sent forward to the château to ascertain if the enemy were nearby and in what strength. They moved via the cover of nearby woods until they reached the château and its surrounding stables and began to search the area.

After finding the château clear of enemy, Geoff and Corporal Jack Watkins moved to the area around the back of the stables to investigate further.

Leading the pair, Watkins suddenly froze. He turned to Geoff and whispered, ‘When I say run, run.’ Watkins had spotted some Germans approaching through a field who in turn had seen them. Watkins yelled ‘Run!’ and the pair took off as the Germans opened fire.

They ran for cover, darting back through the open-ended stable they had come from, but as they did so Geoff was hit across the back of his legs. One of the Germans had fired through the windows of the stable into the brick walls causing bullets and bits of brick to ricochet in all directions, wounding Geoff in the process.

This angered him so much that, after getting back on his feet, his immediate reaction was to try and get on top of a haystack to see who was shooting at them to return fire and Watkins had to work hard to convince him otherwise.

They knew they had to leave. Watkins ran to the château to warn the others of the Germans’ arrival, whilst Geoff sprinted as best he could around the château and into the woods beyond.

He made it to a ditch bordering the woods that was held by the Paras. One of them leapt up, grabbed Geoff and pulled him in. Safe from the fire for now, his heart pounded away as Geoff took a moment to inspect his legs and was startled to see blood spurting from his wounds.

He eventually made it back to the Paras’ main position where he received medical attention at the Regimental Aid Post before being evacuated back to England.

See an interview with Geoff Pattinson about his time in Normandy here.