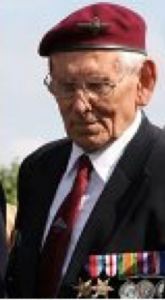 James Kenneth French was known to his friends as “Jimmy”. Prior to the outbreak of war he joined the Royal Artillery and 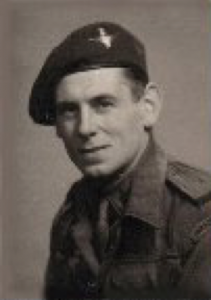 was trained as a signaller. In 1943 he volunteered to join the Parachute Regiment.

He qualified as a military parachutist on course 96, which ran at RAF Ringway in December 1943, and subsequently served with 9 Para Bn HQ Coy Signals Platoon during the campaigns to liberate North West Europe in 1944-45.

The first action he saw was on D-Day when 9 Para attacked and disabled the Merville Battery, they then defended part of the eastern flank of the invasion at the Battle for the Bois des Monts and the Battle of Chateau St. Côme until being relieved on the 13th June.

9 Para spent the remaining months of the war pursuing the retreating German army across Europe. After the European ceasefire they were given a policing role in Palestine.

Following the end of WW2 he served with the London Metropolitan Police for 30 years. Each year, while he was able, he visited Normandy with other veterans for the D-Day anniversary to commemorate the memory of their fallen comrades.

Jimmy French died on 17 May 2014 aged 92. At his request, his ashes were scattered at the Airborne Memorial close to the Chateau St Come. 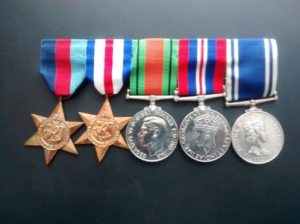 AWARDS (left to right as viewed from front)