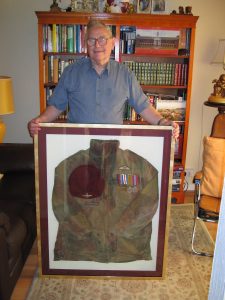 Joseph was initially from Battersea in London. Born on the 19th July 1926, the second son of Jeremiah and Belinda Holmes. He was initially posted into the Royal Ulster Rifles before undertaking Parachute training in the Peak District of Derbyshire, before the move down to the Newbury area in Berkshire. He always said that he and a few other comrades, from the RUR, were always proud of the fact that they continued to wear their black buttons from the RUR.

During the course of the actions in Normandy, he was in the party who were to deploy the Bangalore torpedoes, but was one of those men who were dropped wide and had difficulty in rejoining the battalion. However he and the others successfully did so. However this meant that he actually missed the action at the Merville Battery.

He continued with the battalion throughout France and Belgium and on into  Holland where he took part in the crossing of the Rhine. He always used to say that this was the best drop in military history as it all went to plan!

Sometime later he and his colleagues were fighting their way through a village or small town, when they were attacked and mortar bombs exploded in their position. A number of men were killed, and the remainder wounded, including Joseph. He had been wounded by shrapnel in his legs and knocked unconscious by the blast. When he came round he and the remaining men were surrounded by German soldiers who took them as prisoners of war.

At some point these men were handed over to a German Marine unit and taken to a POW camp . From there the men were moved to a couple of other camps before they ended up in Stalag Luft 4 near to Hamburg. He was still there at the cessation of the war and was freed by the advancing American forces. He was able to send a card giving basic details of his plight to his wife, who had initially been told that he was missing in action. He was repatriated to the UK sometime in June 1945.

He was admitted to hospital near Redhill  where he underwent surgery to remove the shrapnel from his legs and lower body. Afterwards he was sent to a convalescent hospital that had been set up in Richmond Park. Upon his discharge from hospital he was posted back to the Royal Ulster Rifles depot in Ballymena.  Here he served until his discharge from the army in 1947.

Like most men of his era, he was awarded the following medals:-

Many years later he was presented with a medal from the French Government. Joseph passed away on the 27th September 2018.