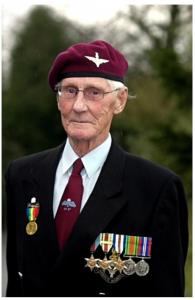 From the Oldham Chronicle:

Leslie Hull was presented with the Chevalier de la Legion d’Honneur for his heroic deeds in Normandy during the Second World War. But the medal was only handed to him 60 years after the conflict ended.

Mr Hull was serving in the 9th Battalion, the Parachute Regiment, in Normandy on D-Day and he and 650 of his comrades had the task of parachuting into France and silencing the German Guns. Allied forces preparing to make landings on Sword Beach in Northern France in June 1944, faced a battery of guns overlooking the shoreline at Merville.

Mr Hull told the Evening Chronicle in 2005: “We were under enemy fire as we approached the gun battery which was protected by barbed wire.

“Only 150 troops got there and only 95 came home. But if we had not silenced the guns, very many more British troops would have lost their lives on the beaches.”

After the war Mr Hull, originally from York, became a parachute instructor with the Territorial Army. He moved to Delph in 1971 and later worked as a civil servant, and was a member of the Parachute Regiment Association in Oldham.”