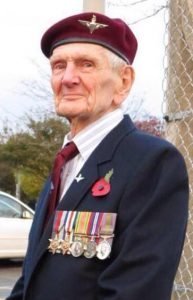 Peter LOVETT first joined the Kings Regiment, 8th Bn, N°7 Assault Beach Group who landed with the 2nd wave troops on Juno Beach near Graye-sur-Mer. 5 weeks later, owing to the Battalion being disbanded, he was transferred to the 9th Parachute Bn as a replacement close to Chateau St Côme in le Bois de Bavent.

Peter then fought in Normandy for the Operation Paddle, also in the battle of the Bulge, and he later dropped over the Rhine for the first time as part of Operation Varsity.

On VE Day, he met the Russians at Wismar. He later went to Palestine and joined the 2nd Para Bn for 5 years, with which he was based in Cyprus, Egypt and Germany.