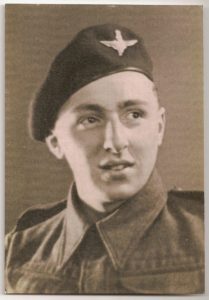 Peter Russell was born on the 11th November 1924 and was brought up in Brussels, Belgium. His father, Major Daniel George Russell, served in the British Embassy Belgium in the inter-war period. At the age of 15, he escaped Belgium via Dunkirk in May 1940 with the rest of his family. He moved to his father’s home town, Ventnor, Isle of Wight, until being conscripted into the army in 1943.

After initially serving with the Royal Fusiliers, Peter Russell volunteered for the airborne forces. He took part in parachute training course 89 at RAF Ringway. The course lasted from the 28th October 1943 to the 9th November 1943. It was noted that Private Russell was “Good all round”.

Peter saw action in Normandy, Belgium and Holland. He also dropped by parachute during the Rhine Crossing and served in Palestine post war.

Here is an an account of Peter’s time in Normandy, dated July 1944, taken from the Isle of Wight Mercury Newspaper:

“Peter Russell, son of Captain D.G. Russell, M.C., R.A., formerly of South Bank, Park Avenue, has a stirring story to relate of his experiences on invasion day. He formed one of a party of paratroops who landed twelve miles behind the German lines. Their glider made a crash-landing, and he sustained a dislocated shoulder and arm injuries. He is now in hospital in England. After the accident he was unconscious for, he thinks, about half an hour. After that he had to use German weapons to get though their lines. His party had to leave the pilot of the glider behind suffering from two broken legs and an arm. They bandaged him with improvised splints, left him a 24-hours’ ration and promised to rescue him if possible. When they reached their objective in a certain village they were joined by other paratroops, and after 48 hours’ fighting secured 165 German prisoners. Then they got hold of a Jeep, and went to rescue the pilot of the glider, who is now in hospital in England. Until they returned to their objective the party lived on tablet rations and cheese provided by the French. The writer speaks highly of the succour rendered to them by the French people, who helped them all the time, even tearing up their blankets and sheets to act as bandages. An old French farmer proudly produced a bottle of Cognac, which he had hidden from the Germans. Capt. Russell was for some time before the war attached to the British Consulate at Brussels with his family and his wife and her sisters – the last-named are still living in Park Avenue – they left two days after the war began, and had an exciting journey to England.”

Note: I think the glider was CN066, though I can’t be certain. It carried equipment and 6 parachutist’s that were supposed to support the assault on Merville battery. In reality, it landed over 10 miles away and did not take part in the assault. He did talk about holding a crossroads somewhere but I cannot be certain of this.

On another point, my family did think for a long time that my Father was the “Russell that fell out of a tree” in Neil Barber’s “The day the Devils Dropped In”. In reality, this Russell was unlikely to be our Father since he had shoulder injuries…..but you never know for sure.