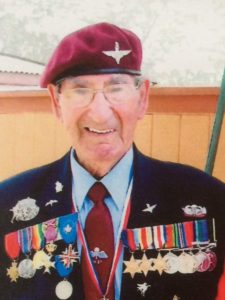 Born in Sedgeberrow and a pupil at Pershore Senior School, Mr Johnson joined the Worcestershire Regiment at the age of 16 in 1938.

Walter married Joyce on the 9th June 1945 – she had been in the land army at Avonbank Pershore where they met.

In 1943 joined the Paras and is described on the division’s training record as “well above average, a capable performer and good jumper”.

From the Worcester News:

In the book he describes what happened when he was first dropped, losing his rifle and landing in an elm tree.

“After a few vigorous swings back and forth I managed to grab the trunk. I undid my harness and slid, with my hands tightly around it, down and it seemed 25 feet maybe 30 feet. Anyway, I found myself in a wooded area.

“My hands were skimmed from sliding down the trunk but it didn’t worry me too much, as least I had landed with no other injury. Drawing my fighting knife from its sheath, I started to advance towards the direction of the rendezvous.

“Everything was so quiet and I heard cows mooing nearby…Which way to go was a problem so I just followed a truck. Next thing I fell in a ditch full of water. I could have done without a bath really. I kept going, and eventually met up with more Paras. Who they were I didn’t ask. You just kept very quiet and followed in their wake.”

He also recalls how he was injured:

“I seemed to be deafened by the noise of the battle and confusion which was now going on as I found myself running and looking for cover, seeing Germans running here and there in all this. All this in a matter of seconds, and as I made my way I was caught by a sniper. My hand was pinned to the butt of my rifle and down I went, and probably caught by an explosion as my smock smelt as though it was on fire.”

After the war he became a landscape gardener & worked alongside Percy Thrower. In later life he moved to Presteigne, Powys, and he won an award for the best kept garden in Radnorshire which was dedicated to his wife Joyce.

Walter is buried at Presteigne Cemetery 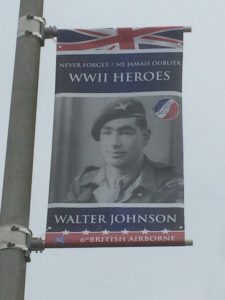